Yet another trip partway up Rainier. Sigh. After a week of thunderstorms, freezing rain, and snow on the mountain, the weather broke beautifully for the weekend. The forecast called for 25°F with a 10 mph wind on the summit. Super, super mellow mountain conditions. Saturday morning I headed up with a couple guys I’d climbed with in the past and a friend of theirs. 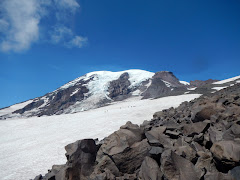 After considering climbing via the Kautz Glacier route, we eventually opted for the standard DC route due to discomfort about the current ice conditions on the Kautz ice chute (couple hundred feet of 50-60 degree steep snow and ice).

We left Paradise mid-morning and covered the 4.5 miles and 4700 feet of elevation up to Camp Muir in a couple hours. I haven’t really hiked anywhere since Corsica back in June, but my legs and lungs felt solid on the ascent. It was a nice sign for how I’d feel on the additional 4000 feet up the next day.

At Muir, I spent the afternoon organizing my gear, melting snow for drinking water, eating and drinking as much as I could stomach, and trying to avoid getting sunburned. It was a really nice change of pace to run my cook stove outside without battling any wind. Temps in the 40s and easily the nicest weather I’ve ever had at Muir. 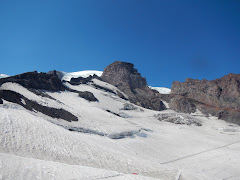 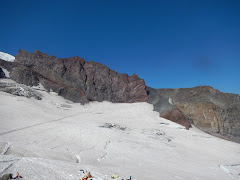 Predictably, Muir was a zoo, with a packed bunkhouse and dozens of surrounding tents. The evening views of the clouds over the Muir snowfield were pleasant. 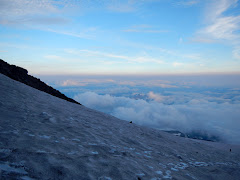 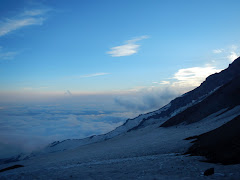 We planned on a midnight alpine start. The aforementioned friend opted out of the summit push, citing fatigue, so we’d have three on the rope team. We tried to get a couple hours of sleep crammed on the wooden sleeping platforms in a bunkhouse full of rustling sleeping bags, jangling gear, creaking doors, and snoring. A losing proposition. I think I slept fitfully for about an hour.

At 11 pm a number of groups were stirring, including ours. I walked outside to dark views of an orange half moon and a few headlights already bobbing across the Cowlitz Glacier. Unfortunately, some of the stirring in our group involved vomiting and headache-induced head-clutching, presumably altitude induced. I felt super sharp and ready to climb, excited for the prime weather and morning views, so obviously felt dejected by the news. There wasn’t anyway around it though, we had to head down. Back at the car at 3 am and home by 5 am.

Maybe next time, or maybe I’ll just stick with solo climbs for a while. 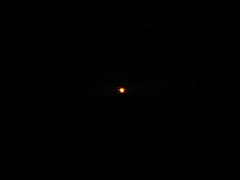 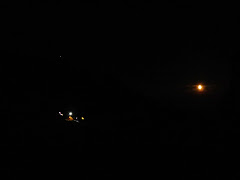