A guy we play Frisbee with was looking for a third person to team up with for a summit attempt on Mt Rainier last weekend. Hey, why not? The weather forecast was gorgeous, but we would be headed up following a couple weeks of heavy snow and wind up there, meaning really sketchy snow conditions. According to the ranger’s report, no one had summited since before the snow and the guide services were all turning back at Cathedral Rocks due to potential avalanche conditions.

Figured it was a longshot, but you never know.

With the short notice, I hadn’t done any training hikes and also hadn’t rested my legs like I normally would for a big outing. Also my first time since ’09 with a full overnight pack at elevation. Not a great combo. My legs didn’t feel sharp at all on the 5,000 ft climb from the parking lot at Paradise up to Camp Muir on day one. Arriving at Paradise so late in the day didn’t help either. Felt like a zombie as I lurched the last thousand feet up to Muir under star light a couple hours later. You can see the late day shadows on the photos below. 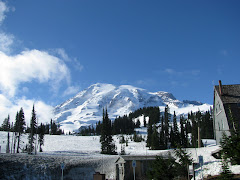 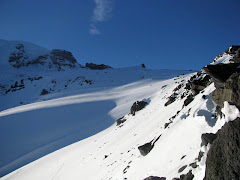 At Muir we crashed at the climber’s hut, squeezing into the last few open spaces on the wooden sleeping platforms, and caught a few hours of sleep before a planned 3 AM start to summit day. I assumed there would be groups setting out well before 3 AM (as they normally do from Muir), but when I looked around the hut after “sleeping in” until about 4 AM the next morning, it was clear nobody at all was stirring from the hut crew.

I wandered out into the wind-whipped darkness and could see headlamps in the distance bobbing toward Cathedral Rocks, presumably some of the guided groups heading up to take their chances. Back inside the hut, we geared up under the spotlight of headlamps and melted snow for drinking water and breakfast. I choked down some gummy fruit snacks and tepid couscous. Despite a restless, cold night’s sleep, and the previous day’s fatigue, I felt strong and ready to move. Happy to be meeting the day high up in the mountains again.

When I stepped out into the morning twilight a while later though and peaked up at Cathedral Rocks again, it was pretty clear we were going to have a short day. A group of climbers was perched on the Cathedral Gap ridge and another was making headway back toward Camp Muir across the Cowlitz Glacier. I assumed avalanche conditions were still prevalent. Bummer.

Our group of three talked it over and decided to push up anyway to take a look at the conditions before officially pulling the plug. We roped up, talked with a group who’d already returned to camp, and set out.

Below: morning sunrise, people dots on the Cowlitz Glacier and the view down from Cathedral Gap. 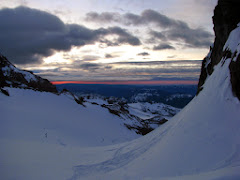 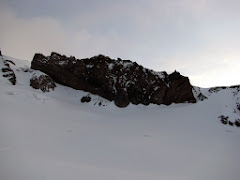 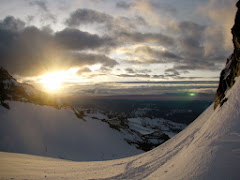 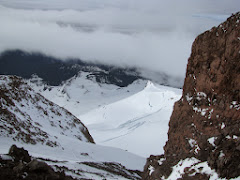 We moved efficiently up to Cathedral Gap, turned the corner up toward Ingraham Flats and quickly ran out of bootpacked trail. A number of guides had dug snow pits here, testing the failure strength of the slopes, and then turned back toward camp. We dug our own snow pit and quickly came to the same conclusion. It wouldn’t be fun to be pitched into a crevasse downslope here. 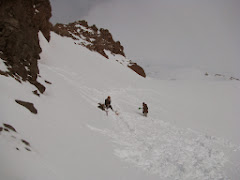 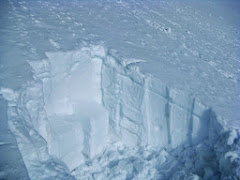 So we called it a day (pretty easy call), relaxed, ate some snacks, and headed back to Muir. We had partly sunny skies, but above us the summit looked socked in with snow. The wind was picking up by us too. The two photos below were take a few minutes apart. Sunny one minute, snowing the next. 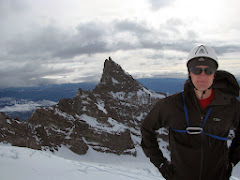 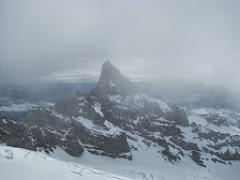 Headed back to Camp Muir: 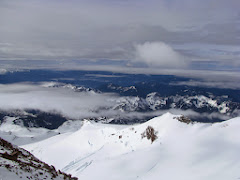 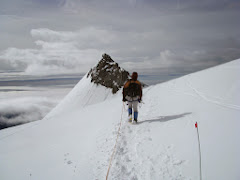 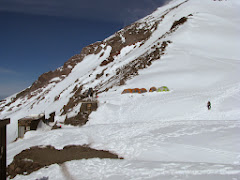 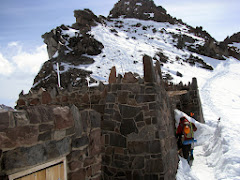 There was brief talk about staying an extra day and trying again Sunday morning, but nobody in our group seemed too excited about that, so we headed for home. Below, descending in the wind: 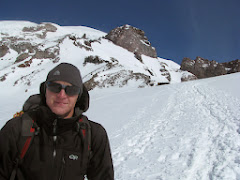 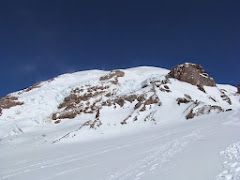 All in all still a good workout in a beautiful setting and a great training run. It was nice to be roped up again and shake the rust off the glacier travel skills.