Mount St Helens! Really, really enjoyable climb up to the crater rim via Monitor Ridge yesterday. 8.7 miles and 4,700 feet of elevation roundtrip. 2:45 up, moving steadily – with a half hour delay to deal with an ice field. 1:20 down, running about half. 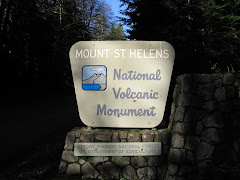 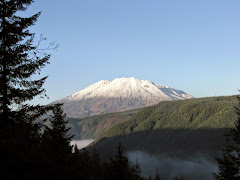 The hike starts in the trees and follows an easy trail for the first two miles, then pops out to a lengthy boulder field with the path marked by wooden posts propped into the rocks 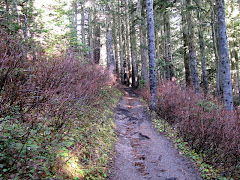 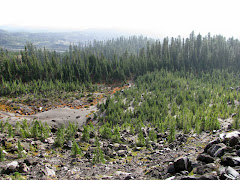 I was in a cloud layer until about 6,000 feet. Warm enough to be sweating in shorts and two light top layers, but the air moisture immediately chilled the sweat. My shoulders were covered in tiny tendrils of ice and the ash/pebble footing was nicely frozen in place (rather than puffing up into my boots). First clear view up the mountain above the clouds. 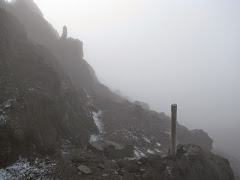 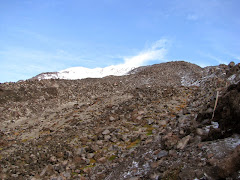 Frozen boulders along the trail. Looking back into the clouds. 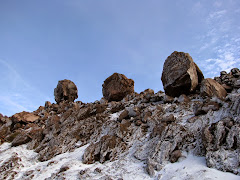 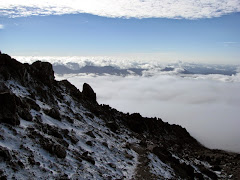 Getting closer, footprints in the snow in front of me. I passed a small group a little bit after this photo and had clean snow the rest of the way. Wind-blown ice. 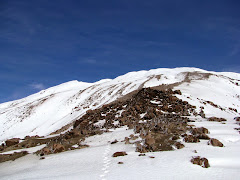 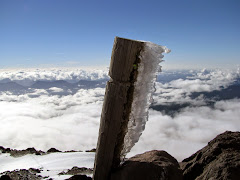 400 feet below the crater rim I ran into a sheet of ice on the ridge. A thick sheet that wasn’t budging as I tried to kick steps. Earlier, while packing, I’d opted not to bother bringing my crampons. Dumb. Not good. I tried a few different lines up the ridge, all frozen solid and shedding my attempts to move up.

I sat down on the ice and considered my options. I could turn around. I could wait for the group behind me and hope that they had crampons that broke the ice enough for me to follow their steps up. I could sit and wait for the sun to hopefully soften the ice. Or I could painstakingly chop lateral steps in the ice with my axe and try to find softer snow off of the ridge and have an adventure. That’s the one, let’s go!

Photo below left: Ice in the foreground and Mt Hood in the distance. Right: looking laterally, hoping to find softer snow over there somewhere. 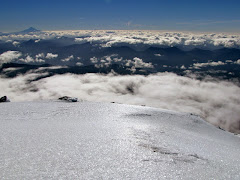 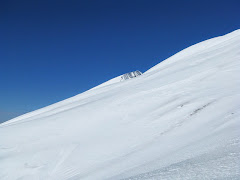 So I chopped and kicked my way to the left, finding more ice and then encouragingly a few sections of softer snow. I carefully wound my way upward (quads cramping and toes aching from the kicking) then I was there, cresting to an immediately expansive view.

Snow pack on the rim. Looking north into the crater and toward Spirit Lake and Mt Rainier. You can see the plumes coming off the inner lava dome. Active volcano! 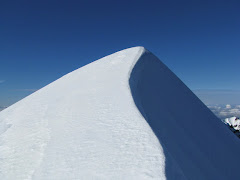 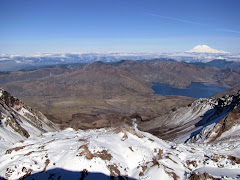 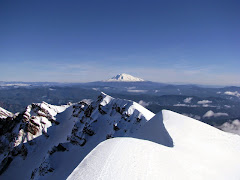 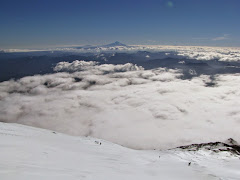 Another look at the lava dome. And side view of the crater, big drop, don’t want to fall in that direction. 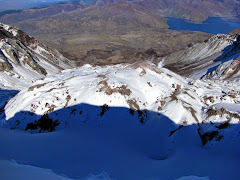 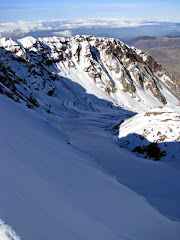 This was my high point for the day, a couple feet under 8,300, I think the true current high point (8,366) is the peak in the photo on the left. I had no interest in skittering across the ice along the ridge to find out though. 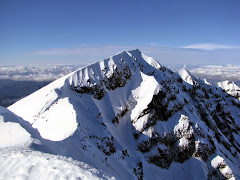 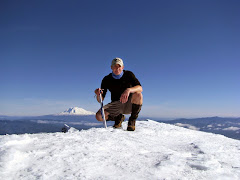 I spent about an hour on the rim, then retraced my steps back down the mountain. Here are my footprints on the rim and a side shot of the snowslope. 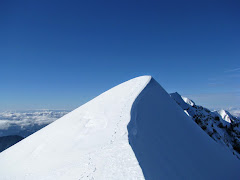 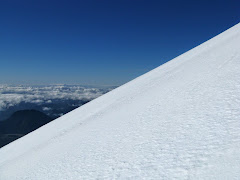 And a couple more shots from the way down. Observation station. Slope boulders with Mt Adams behind. Great day! 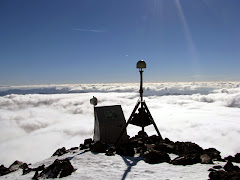 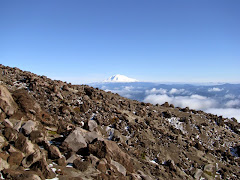