Photos from the El Dorado climb a couple weekends back. This is about a four and half hour drive from our house. I swung by the Marblemount ranger station (North Cascades National Park) on the way up to grab a self-issue backcountry permit and then was at the trailhead from Cascade River Rd around 1 pm.

I had a full pack with more gear (snowshoes, crampons) than normal to account for potential winter variables up higher, so I ended up forgoing my tent, figuring it wouldn’t make much difference with a clear night forecast. On the trail twenty minutes later. After an immediate log-crossing the trail climbs straight up through the trees (I love the lack of switch backs on the way up and hate it on the way down) before popping out to a boulder field somewhere north of 4,000 feet elevation. Boulder field and Johannesburg Peak to the south. 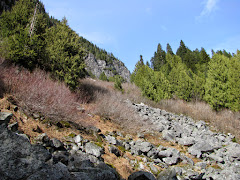 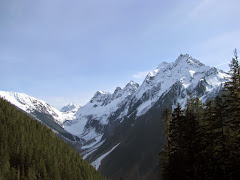 The top of the boulders was also approximately the start of the snowline. At 6,200 feet I cut across to a ridge that gave nice views toward Forbidden Peak to the east and The Triad to the west. 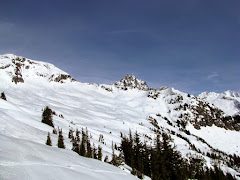 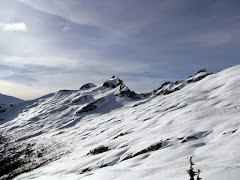 Also a peek at the summit of El Dorado in the distance with El Dorado Glacier (to be crossed) in the foreground. Now “glacier” to me generally implies some hazard potential, but weather conditions were good and I was happy to see a group of three skiers (three dots in the photo below left) ahead of me moving without issue. I dropped down off the ridge onto the glacier, following their tracks. 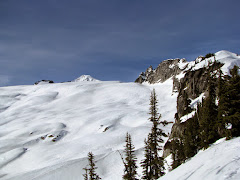 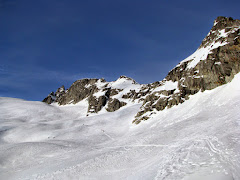 I wore snowshoes most of the way up the glacier and was glad to have them in the soft afternoon snow. The push to about 7,500 feet brought me to Inspiration Glacier, a sweeping flat with big views of El Dorado and surroundings. I stopped for a few minutes to layer up (chilling in the wind in my shorts), preferring not to fumble around later with cold hands as the sun disappeared. The skiers had set up camp on the south side of the flat. Also pictured, Pt 7733 and Johannesburg Peak. 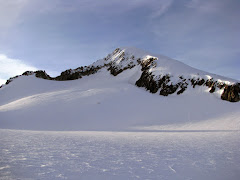 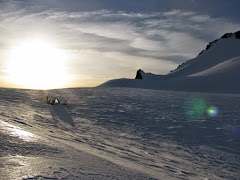 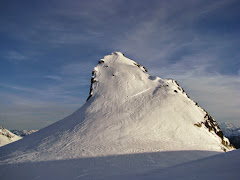 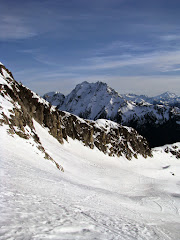 With a little daylight left, I cruised across the glacier and up the El Dorado east ridge. Photo of my eventual camp site (labeled in yellow) and the ridge (with bergschrunds) up closer. 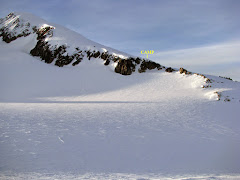 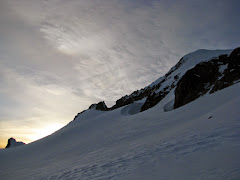 On the ridge I found a person-sized section of flattish snow next to some rocks near 8,000 feet and dropped my pack for the night. There was just enough room to fit my sleeping pad and the rocks hopefully would keep my from sliding dramatically in my sleep. I hopped into my sleeping bag and melted snow for drinking water and my dinner of instant mashed potatoes and oatmeal. 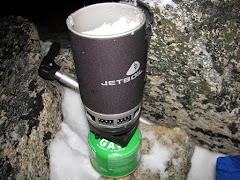 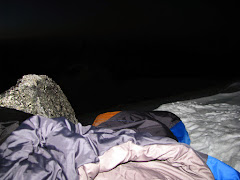 I did not sleep well. The wind picked up and the moon was brilliant. The snow skittered across my sleeping bag. I wore every layer of clothing I’d brought with me, but still needed to curl into a ball to keep from shivering. It’s difficult to curl into a ball inside a sleeping bag – I curled into a “z” since that’s as high as I could get my knees. I promised myself to remember how cold I was next time I planned to do this.

At 5:30 I called it close enough to daylight and bravely emerged into the freezing morning, packing quickly and opting for a mobile breakfast. My boots were frozen solid, I plied the leather briefly then jammed my feet inside knowing I needed to get hiking to get warm. My toes were numb within minutes, but the rest of me was warm as soon as I started up the icy slope.

All was forgiven as I sat on the final ridge in my crampons and watched the sun come up in the distance. 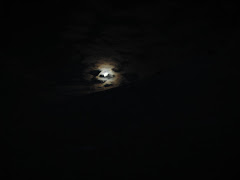 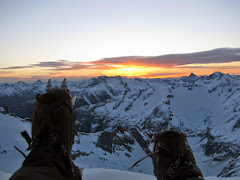 El Dorado has an iconic knife edge summit ridge that depending on winter conditions varies from unsafely narrow to probably okay. Many people rope up for the final stretch regardless due to significant drops of both sides, but I was comfortable with the footing and cornice conditions I found. Alpenglow on the summit. Sunrise. 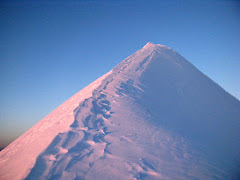 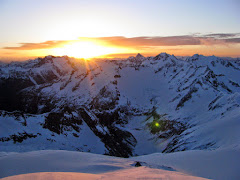 Small summit cornice. Me on top. 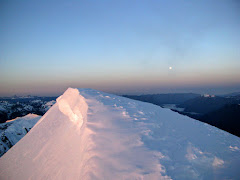 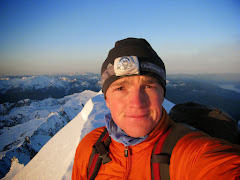 Across Inspiration Glacier toward Klawatti Peak. 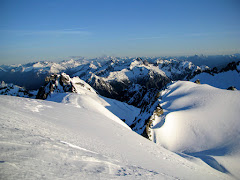 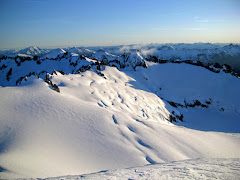 And retracing my footprints down the ridge. Gaping maw of a crevass. 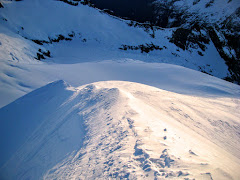 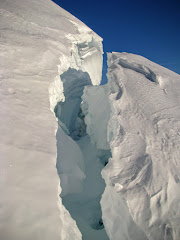 Looking back south, you can see a tiny dot of the skiers’ tent across the snowfield. And looking east down at my camp site, just in front of the rocks in the foreground. – evidently there’s a nuclear explosion happening in the background also 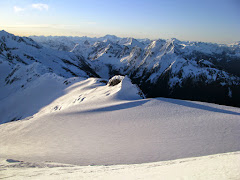 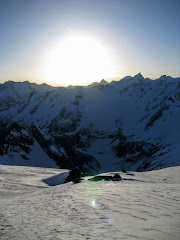 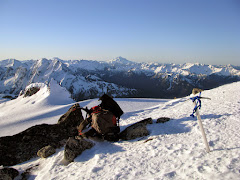 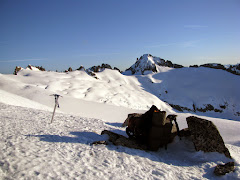 And finally the long knee-crunching trip back down to the car and the juxtaposition of rain-foresteque roads. My quadriceps and knees were sore for a week after this adventure, but two weeks later now I can’t wait for the next one. 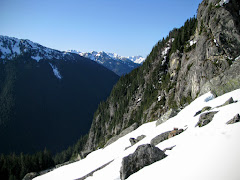 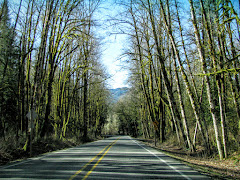